I joined the lab of Dr. Kenneth Ross as a Ph.D. student at the University of Georgia in 2016. Like many of Ken’s previous students, I was quickly drawn to the excitement of experimental biology. Our lab focuses on the red imported fire ant (Solenopsis invicta), a problematic pest in the southeastern U.S. One good thing about studying invasive ants is that they are everywhere. I often walk out of our laboratory building to observe the development of “wild” colonies and get first-hand knowledge of their natural history. Moreover, I continue to gain a deeper understanding of their biology through collecting and rearing hundreds of colonies in the lab every year, including populous mature colonies, smaller experimental colony fragments, and incipient colonies founded by newly mated queens. Such a deep connection with the organism and a firm understanding of its natural history is fundamental to our research programs, allowing us to design feasible, efficient, and informative experiments.

My Ph.D. work aims to help construct the genotype-to-phenotype map of the polygyny syndrome in S. invicta, with my emphasis on the phenotypic (behavioral) end. It has become clear that such social form variation is underpinned by a large chromosomal element with reduced recombination, a supergene termed Sb. When workers carry Sb, the colony accepts numerous queens, but only those that also carry the Sb supergene. Yet, we lack a good understanding of how social form is regulated at the proximate level, such as which chemical signals are involved and what critical factors govern the workers’ collective queen preference. One of my projects used novel high-throughput behavioral assays to test worker responses to various queen cuticular fractions in order to identify the key pheromonal components that convey a queen’s supergene genotype status. Another project aimed to investigate the influence of Sb workers on a colony’s collective queen preference, even when these workers represent only a minority of the colony worker pool. I am also engaged in addressing other questions, such as the mechanism of sex ratio bias of monogyne colonies and characterizing the proportion of haploid Sb males in polygyne colonies. In addition, keeping hundreds of colonies in the laboratory allows me to “play” with the ants and generate creative side projects such as using ants to make artworks and inducing ants to build pontoon bridges to reach food across the water.

For my future research, I wish to continue working with ants or other social insects. To me, social insect behavior represents the most remarkable phenotype to analyze scientifically. In particular, I would like to focus on the evolution of complex “extended phenotypes” exhibited in ant colonies, such as social form polymorphism, nest building and migration, and the formation of dynamic bodily structures. Furthermore, I wish to study them with an emphasis on the proximate level, how the genetic, chemical signaling, and behavioral pre-adaptations permit the emergence of these complex behaviors. This can be done by 1) detailed characterization of the target traits and 2) exploring the relationship among individual actions, emergent collective traits, and the ecological context in which the organisms are placed.

Abstract: The multiple-queen (polygyne) social form of the red imported fire ant (Solenopsis invicta) is associated with the Sb supergene, a Mendelian genetic element formed by chromosomal inversions. When workers carry this Sb supergene, the colony accepts multiple reproductive queens, given the queens also carry the supergene. In contrast, when a colony’s workers lack the Sb supergene, as is the case in monogyne colonies, the colony tolerates only a single reproductive queen. Colonies previously were shown to display polygyne behavior with as few as 10% to 20% of workers carrying the Sb supergene. However, it remains unknown how such a low proportion of Sb workers affects the collective social phenotype of the whole colony. To identify essential factors in the collective acceptance of Sb queens, we conducted a series of behavioral assays using mixed polygyne-monogyne worker units with the proportion of Sb workers around the threshold level of 20%. We changed the type and amount of interaction between the two worker types in the assays to see which conditions favor the acceptance of multiple polygyne queens. Our results showed that Sb-carrying (polygyne) workers directly reduce aggression by monogyne workers towards the queen when polygyne workers roam freely, potentially an effect of volatile pheromones. As well, Sb workers indirectly influence the queen preference behavior of monogyne workers without contacting the queens. As the duration or intensity of direct interactions between worker types increased, acceptance of polygyne queens also increased, suggesting that specific cuticular compounds from Sb workers play a critical role in the process.

As part of my thesis, I wrote a review to summarize our current knowledge of queen pheromones from experimental studies that expressly demonstrate the functional properties in ants. 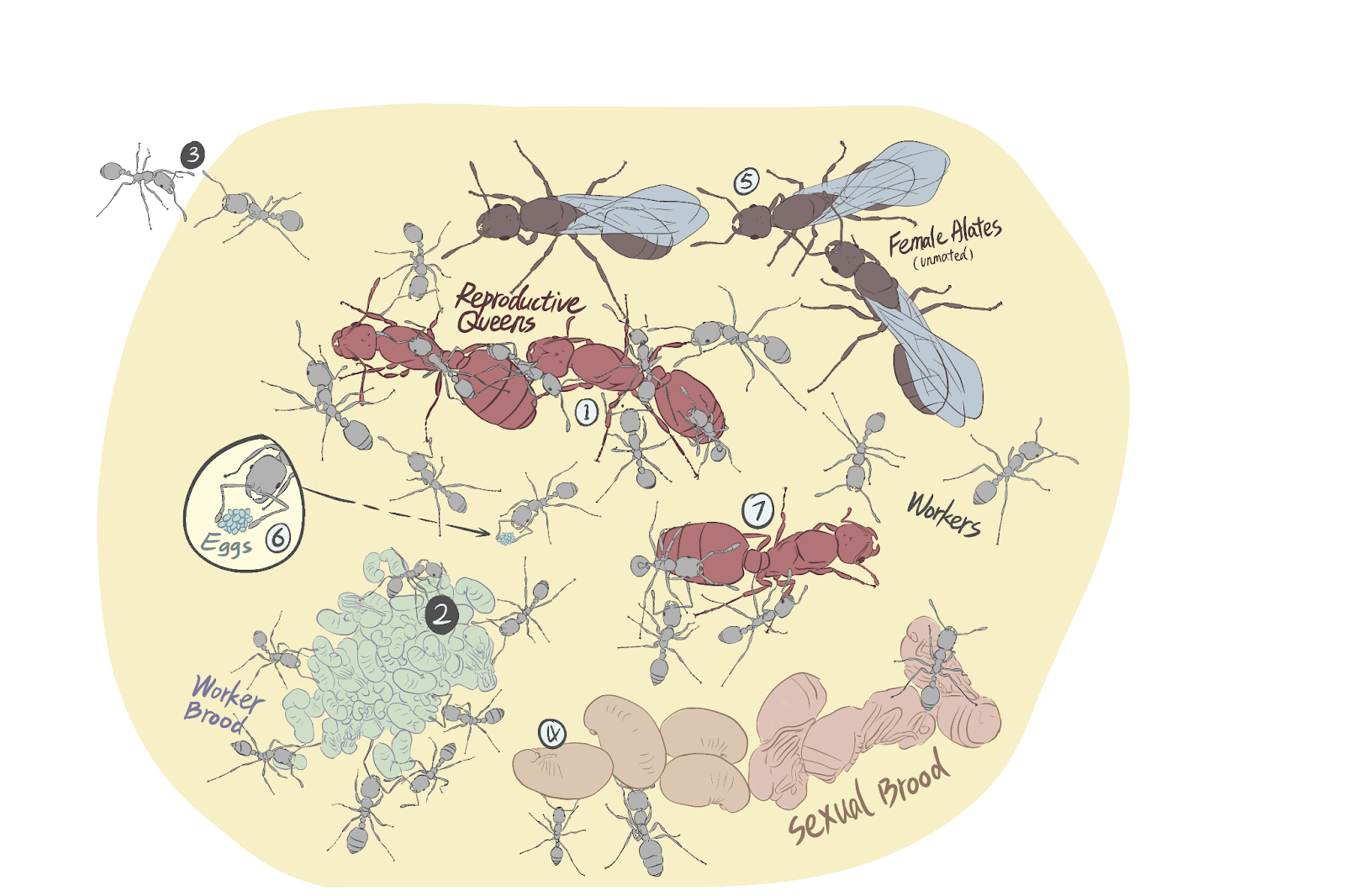 Figure: Summary of generalized functional properties of queen pheromones in ants, as represented in a polygyne Solenopsis invicta colony. These functions include: 1) attracting workers; 2) inducing colony maintenance (such as brood care); 3) inducing nestmate discrimination; 4) inhibiting larval sexual development; 5) inhibiting adult reproductive development; 6) inducing worker policing; 7) inducing execution of supernumerary queens in monogyne colonies; and 8) mediating the regulation of queen acceptance in polygyne colonies. White numbers in dark circles indicate that a chemical basis has not yet been demonstrated for this functional category.

We discovered that fire ant rafting is not a passive behavior. When the destination, such as a food source, is surrounded by water, worker ants actively assemble into “living bridges” across expansive water surfaces so that the nestmates reach the destination. Importantly, unlike other bridge-making ant species, this collective phenomenon can be easily and repeatedly induced in a laboratory setting, which allows us to empirically test existing theories and develop new ones for the self-assembly of group structures. 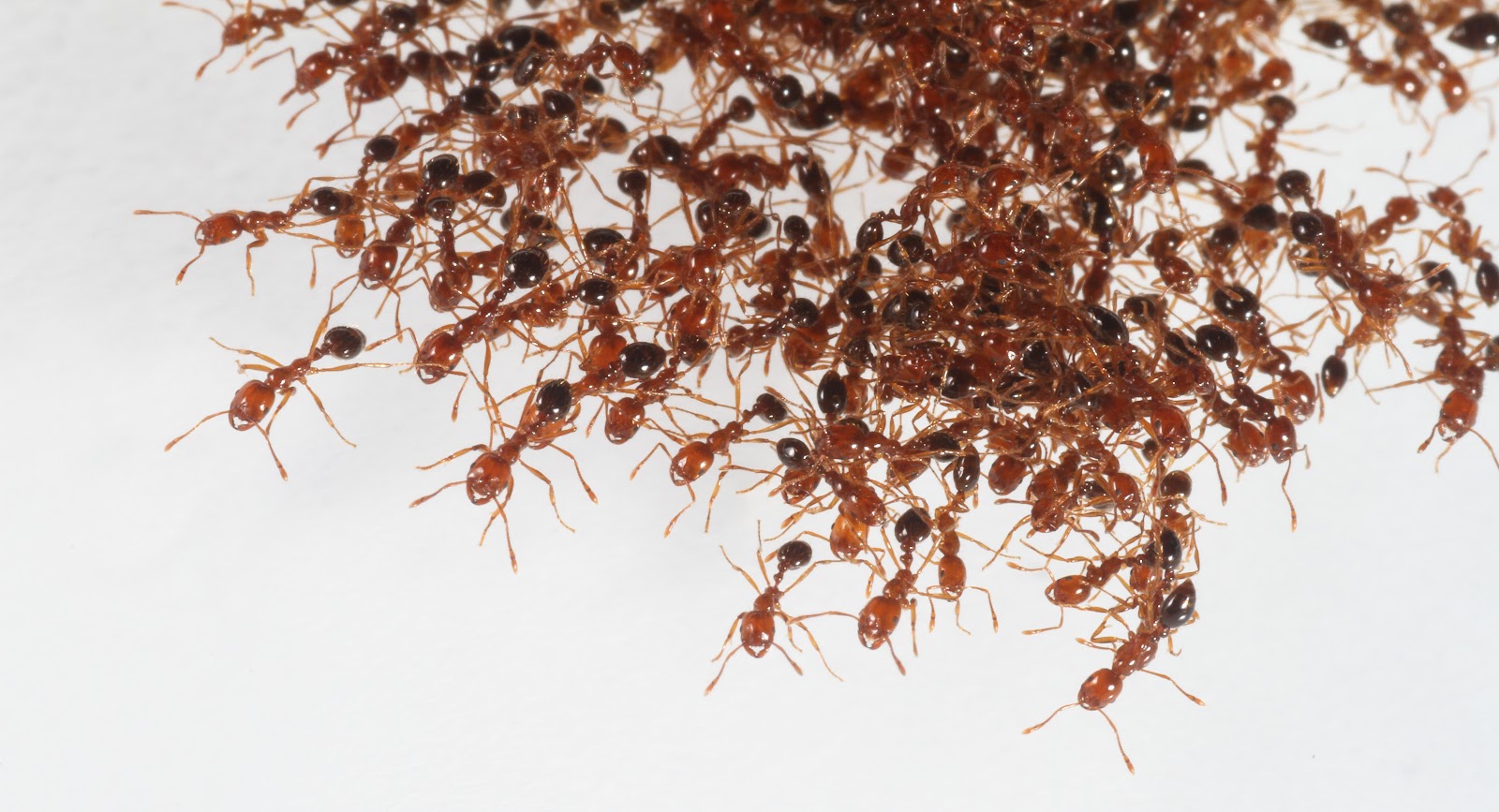 Sep 2014 – Jan 2015 With Dr. Dietrich and Dr. Zaya, University of Illinois, The relationships between Auchenorrhyncha insect diversity and vegetation community composition in Illinois