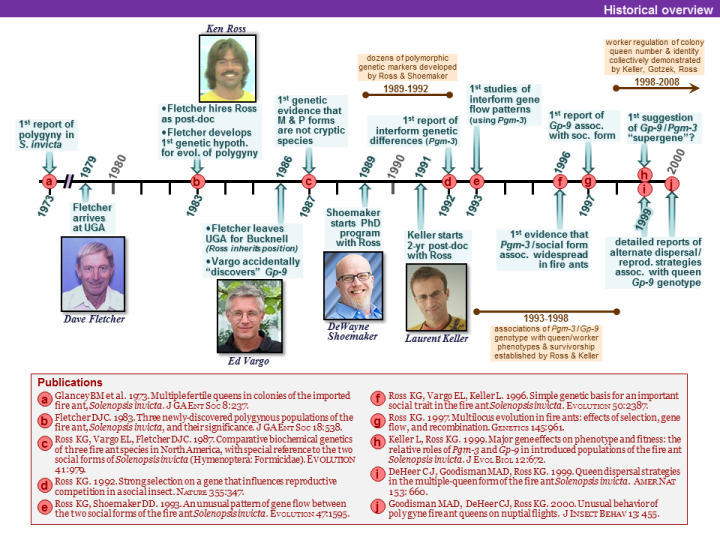 Ross and Fletcher (1985): Use allozyme at two loci for genetic structure. Foundress M queens singly inseminated. Average relatedness among female nestmates of M is 0.714, ~not different from 0.75. P queens also singly inseminated, not more related to nestmate queens then to other queens. No evidence of sub-population or inbreeding in P colonies.

“These results do not support the view that kin selection has promoted the evolution of polygyny in North American S. invicta. Rather, mutualism appears to be the most likely selective factor mediating queen associations in this ant”

Ross (1988): Use genetic markers to assess maternity in P queens. Some queens in P colony produce much more sexuals. But such queens would lose weight and die soon, won’t last long.

Ross, Vargo, Keller and Trager (1993): More diploid males in introduced population than native pop., excluded mating times and level of inbreeding, so concluded that the higher % diploid is because of loss of sex-determining loci allele diversity, (from founder event)

Keller (1993): Suggests reproductive success of queens in polygyne colonies cannot be considered only with # of offspring they produce, but also

Goodisman, Ross and Asmussen (2000): selection on P queens and workers along, without M male gene flow, give the most parsimonious explanation for genotype frequencies in nature. — test if Gp-9 is the main gen; test how much gene flow by M males.

“we addressed this problem by fostering polygyne brood into queenright monogyne colonies. All such treatment colonies switched social organization to become polygyne, coincident with their proportions of b-bearing workers exceeding 12%. “

Gotzek and Ross (2009): a review on the fire ants model system

Lawson, Vander Meer and Showmaker (2012): show that both male reproductive success and facultative polyandry in queens have a simple genetic basis and are dependent on male Gp-9 genotype. Queens mated with Gp-9b males would likely mate again, to get Gp-9B. Queens mated with Gp-9B rarely mate again.Gp-9b males have lower sperm counts than Gp-9B males.

“This difference appears to be independent of mating plug production in fertile males of each Gp-9 genotype. However, Gp-9b males have significantly lower sperm counts than Gp-9B males. Despite the reduced fitness of Gp-9b males, polygyne worker-induced selective mortality of sexuals lacking b-like alleles coupled with the overall success of the polygyne social form act to maintain the Gp-9b allele within nature. Our findings highlight how strong worker-induced selection acting to maintain the Gp-9b allele in the polygyne social form may simultaneously result in reduced reproductive fitness for individual sexual offspring.”

Wang et al. (2013): social chromosome with 13 megabases (55% of the chromosome) in which recombination is completely suppressed between SB and Sb. 616 genes.

Huang & Wang (2014): a synthetic review on supergene of fire ants

“Sb supergene is a selfish genetic element capable of biasing its own transmission during reproduction, yet counterselection for suppressor loci evidently has produced an evolutionary stalemate in TRD between the variant homologous haplotypes on the “social chromosome”. Evidence implicates prezygotic segregation distortion as responsible for the TRD we document, with “true” meiotic drive the most likely mechanism. Low levels of recombination and incomplete gametic disequilibrium across the supergene suggest that selection does not preserve a single uniform supergene haplotype responsible for inducing polygyny.”